I always liked wolves. My Hebrew name, Zev, means “wolf,” and they were Odin’s beasts, which my imagination warped into an ancestral, totemic, Hebrew Norse connection. They’re social, loyal, and loving with each other, but they’ll also tear your fucking throat out if you threaten them or the other wolves they care about. There’s something I like about that.

I matched with a woman once on a dating app because I mentioned drinking mead in my profile. Her: “When you drink mead, doesn’t it give you the intoxicating feeling that you’re saving the bees?!?” Me: “Nah, that’s just an added bonus. Mead gives me the intoxicating feeling that if I were drinking it 1,000 years earlier, I’d be dancing around giant wooden statues of the Viking gods wearing a wolfskin and painted with woad.” The ancient Norse didn’t paint themselves with woad, but I figured that would be a lot less creepy than saying “wearing a wolfskin and painted with sacrificial blood,” which is probably more likely. She didn’t text me back. I didn’t care. If you can’t handle me in wolfskin and woad, you don’t deserve me in business casual over cocktails.

Valentine’s Day seems to annoy a lot of people, single and coupled. I don’t really get this, because I find that it’s actually quite easy to ignore. It’s never been great in any relationship I’ve been in (sometimes it’s been downright awful). But alone? No problem. If I’m single on Halloween, that’s when I really feel that aching, empty sense of aloneness. If you’re a certain kind of person, you’ll get what I mean.

A few weeks ago I went out with a woman I met on an app. We had great chemistry, the kind where you order one more beer just so you can enjoy that electric attraction, that screenplay banter. Then she said, “I always knew one of my foundational purposes in life was to be a mother.” “Oh…I don’t want kids,” I replied. “Well, this won’t work,” she said. Wile E. Coyote, meet tunnel painted onto cliffside.

That irritated me a lot. Why the fuck do you want kids? I thought. We’re at, what, 7.5 billion people, one dipshit Trump-tweet away from a fucking nuclear war, and you think we need kids? I don’t know from parenting, but I can tell you this: a scorched wasteland roamed by rapacious biker-gangs and genetically warped mutants is no place to raise a child. In the cold light of morning, the flaws in this line of reasoning were more apparent, and it even occurred to me that perhaps I, in wanting to leave my writing to the world rather than descendants, was the greater evolutionary anomaly.

I read an article recently–I’ve lost the link–about how educated, single adults without kids are the Information Age equivalent of the celibate monastic class that produced thinkers like Thomas Aquinas. I found this really funny like all my single friends and I should be composing motets, illuminating manuscripts, and performing Gregorian chants. Soli Deo gloria. Left swipe. But I have noticed that I am part of a discreet class of people who seem to have opted out of the traditional cycle of growing up, getting married, and having kids. Our reasons for this vary. For some luck hasn’t been on our side. For others, the choice has been willful. For still others, it’s been both. But very few of us don’t date, or at least try to–and don’t have long rants about how much online dating blows.

I got divorced in 2016. No scandal. But, as Harlan Ellison so brilliantly put it, “My problems didn’t go with her problems at all.” If you’ve been divorced, you know that it pauses your life like a stopwatch. We’re so programmed to find the one that when we think we have and it fails, it stuns you. If you’ve ever boxed, you know that the worst thing about taking a really good shot to the head isn’t so much the pain, which you can shrug off with adrenaline and willpower, but the sheer effort it takes to clear those stars out of your eyes and re-cogitate. Divorce is like that.

About a year afterward, I got hookah one Sunday with a good friend who’d been through a very hard breakup a few years before. We gave our standard rants about dating, and then he said something very wise. “What you have to do, Hunter, is look in the mirror and ask, ‘Would I date me?’ And if the answer is no, figure out how to change that.” I wouldn’t have dated me. I’ve tried to change that. There are some things you can’t change.

He’s a good guy, this friend of mine. He wants the one. He wants the family and kids. It makes him bitter sometimes, and he’ll take refuge in a half-dose of the red pill. He’s not an incel or anything like that, but he’ll verge into the paranoid worldview that sees things in terms of alpha males and beta males. “Never ask women for advice about women,” he told me once. “There’s a saying in the red pill community, ‘A wolf doesn’t ask the opinion of sheep.'” I told him that was the stupidest fucking thing I’d ever heard.

If we’re wolves–and in love we often seem to be–I don’t want to be paired up with a sheep. I want to be paired up with another wolf. A flawed study gave us the assumption that wolves divide themselves into alphas and betas. What wolves have are more like family units. They don’t segregate themselves along those bullshit lines, and neither should we. But we do. And we will.

I don’t believe in the one. I don’t mean that bitterly; I just don’t. There must be lots of ones out there. On a raw personality and chemistry level, each of us probably has ones living in rural China, the suburbs of Lagos, Bandar Seri Begawan. Ones who we’ll never meet no matter how many profiles we swipe through on Tinder. Ones who, but for language and geography and culture, we might be completely happy with. Sometimes that thought haunts me. Sometimes it comforts me.

It would be nice to have a partner in life, but my standards are high. She doesn’t need to be a supermodel and she doesn’t need to hold five PhDs, but I want someone who I have real chemistry and attraction with, mental and physical. When you step out of the ranks of aspiring parents, the chances of finding somebody like that drops precipitously. It’s a basic evolutionary drive, and most people won’t opt out of it. But if you’ve opted out of it, chances are you won’t opt back in. I won’t, and that’s non-negotiable. I’m at peace with it.

I know a lot of kick-ass parents. I look at them and their kids and think, Thank God you reproduced. We’re at, what, 7.5 billion people, one dipshit Trump-tweet away from a fucking nuclear war, and you had the steel gonads to bring kids into that? I don’t know from parenting, but I can tell you this: if we’ve got to traverse a scorched wasteland roamed by rapacious biker-gangs and genetically warped mutants, I’m glad it’s you raising the next generation.

But it’s never been my dream. Part of this is logical; my family has some mental issues in its genome that I don’t want to put on anyone. But a large part of it is also just disposition. I want to travel. I want free time to pursue my hobbies, to write. If I want to box five nights a week, get a beer with friends on a weeknight, or take a Sunday afternoon to go shooting, I can do it–no check-ins, no permissions, no babysitters.

People can be weirdly hostile about this. The r/childfree chat group on Reddit calls the standard responses to this “bingos.” “Don’t you like kids?” (Sure. I like being Weird, Fun Uncle Hunter for a couple hours). “What if your kid grows up to cure cancer?” (What if my kid becomes the next Adolf Hitler? He had a pretty normal childhood) “That’s so selfish. What if your parents felt that way?” (I wouldn’t be around to regret it; unless you’re Buddhist, in which case I’d float around in the Bardo a little longer and be born somewhere else). This last reason is especially idiotic to me; what could be more selfish than bringing a human life into this world to keep up with the biological Joneses? 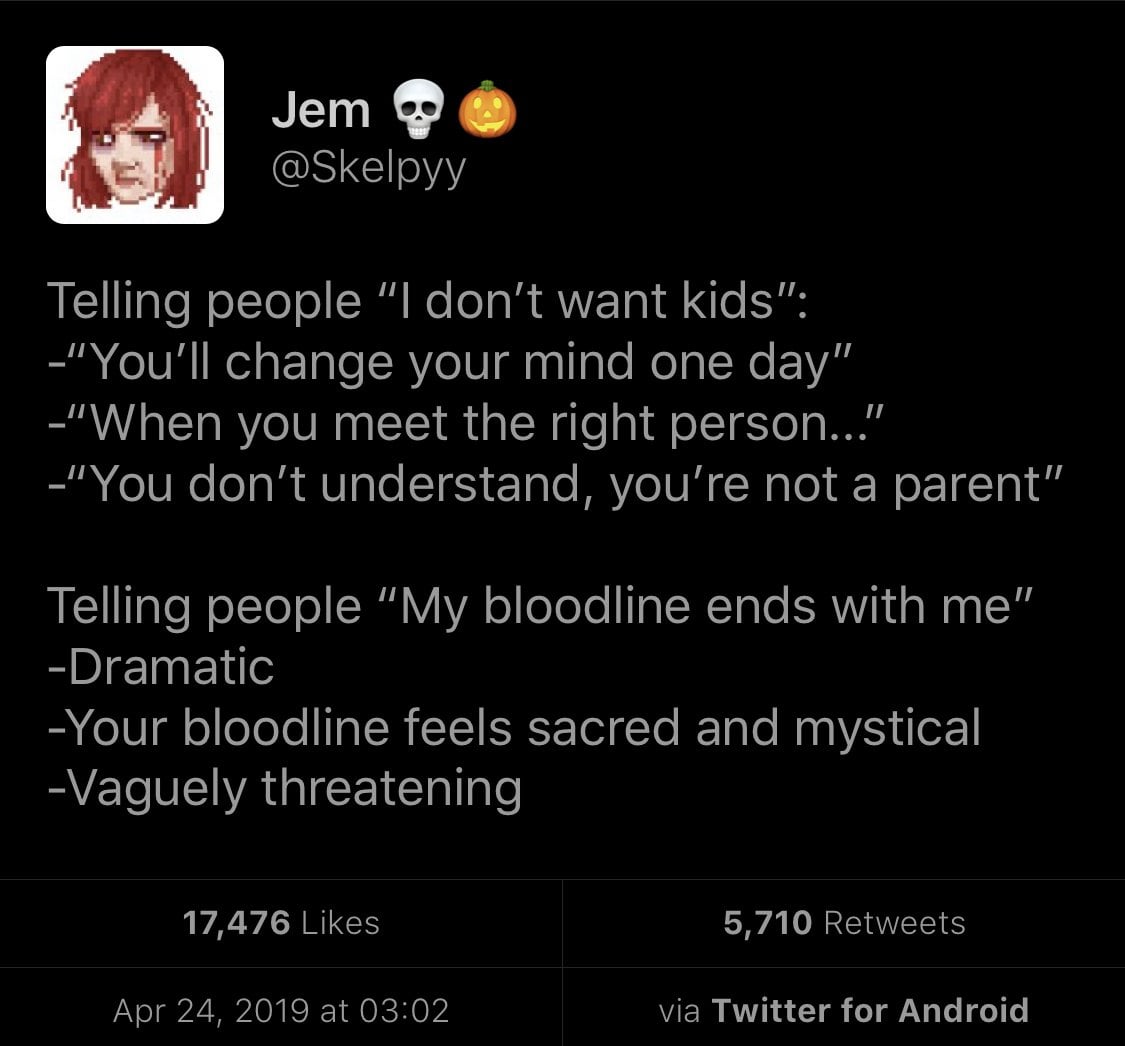 I really could’ve just posted this instead of writing a blog.

We use the term “lone wolf” mostly in connection with terrorism nowadays. It’s more evocative than “dangerous solo radical,” I suppose, carrying connotations of isolation and savagery. But actual wolves sometimes live alone too. Sometimes they eventually join packs and sometimes they don’t, but either way they’re still viable, healthy, wolves with all the loyalty and ferocity and mythic Odin stuff that connotes.

I’m happy to be that way. I’m also happy for those of you who’ve found the one and proven me wrong. I hope your night is whatever flavor of romantic you like–especially if it involves wolfskins.

View all posts by hunterceden